This article is part of a web development series from Microsoft. Thank you for supporting the partners who make SitePoint possible.

What is a Hybrid Mobile App?

A hybrid mobile app is similar to any app that you download from an App Store, but the fundamentals of how they work is different from native apps.

Like websites, hybrid mobile apps are built using web technologies like HTML, CSS, and JavaScript, so most of the JS libraries developers use over the web can be reused for hybrid apps too. The key difference is that hybrid apps are hosted inside a native application that utilizes a mobile platform’s WebView. This enables them to use device capabilities like the accelerometer, camera, and many other system APIs. These capabilities are often not accessible by a website running on mobile. The web is also more interoperable than ever—including modern browser engines like Microsoft Edge’s EdgeHTML—so if you’ve previously ruled out hybrid solutions, it’s a good time to reconsider a hosted web app solution (more on that below).

Where Do Hybrid Mobile Apps Come From?

The above graph clearly communicates that the number of mobile users have clearly overtaken desktop users, which is resulting in businesses refocusing priorities to cater to mobile users. While businesses already had a presence on the web—in most cases a website—the easiest option for them to scale up to all mobile platforms is to consider the hybrid approach. It helps them to keep teams with similar skillsets without having to invest hugely in iOS, Android, or Windows Native developers in one go. It sounds like a cost effective strategy, so let’s dig deeper.

In recent years the web has moved towards standards. We rarely find new web apps with metatags for compatibility with IE6. These HTML5, CSS3 and ES6 standards means the web is now cleaner, working across standard browsers without having to change code. In fact, you can scan your website for interoperability best practices here that also help development of cross-platform hybrid apps.

Today, most hybrid mobile applications leverage Apache Cordova, a platform that provides a consistent set of JavaScript APIs to access device capabilities through plug-ins, which are built with native code. John Bristowe provides a good explanation of the why and how on his blog. It was earlier called PhoneGap. These days, PhoneGap exists as a distribution of Apache Cordova that includes additional tools which is offered by Adobe. For history refer to PhoneGap, Cordova, and what’s in a name?.

These plug-ins include APIs for accessing the device’s accelerometer, contacts, camera, and more. There are also a number of plug-ins that are built and maintained by the developer community at large. These can be found in the Apache Cordova Plugins Registry.

Application assets like HTML, CSS, JavaScript are packaged through the tooling made available through Apache Cordova to target platform SDKs. Once built, you have an application that can run like any other kind of application on the device. While tooling provided by Apache Cordova is largely driven through a command line interface, developers can also use IDEs like Visual Studio. I’ll show you how: 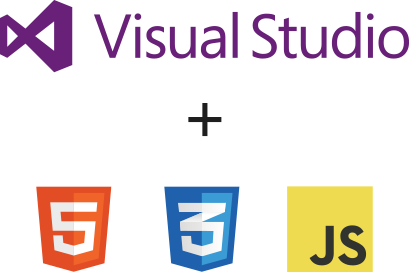 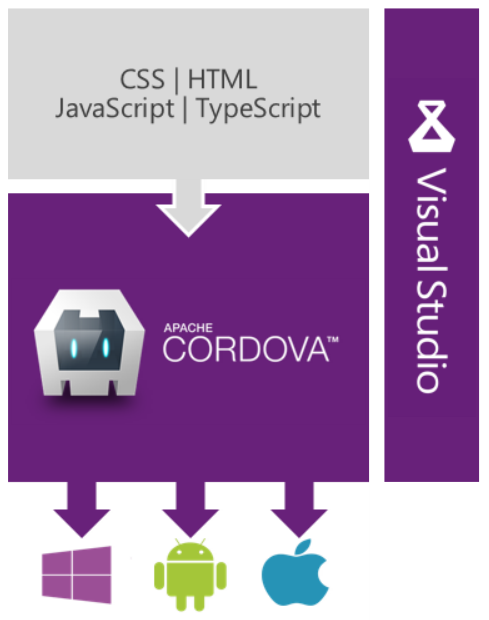 Increasingly, hosted web apps are a new lower cost way to build cross-platforms apps using a pre-existing web experience. The web app is hosted on the server and the HTML/CSS/JS files are not present locally in the package. Open source libraries like manifold.JS have increasingly made this path easier – you build your manifest file, upload logos, and you can quickly put your web app in the Android, iOS, and Windows Stores. Some platforms like the Universal Windows Platform also permit use of native APIs like notifications and monetization features. You can follow this tutorial to create a hosted web application in a few minutes for Windows 10.

Then Why Use Native at All?

In the past Facebook had leveraged the hybrid approach for their apps to ship cross-platform, which they replaced later with native apps, claiming faster performance since native apps leverage platform specific APIs. I am not suggesting that hybrid apps are always a failure, but you need to select the approach wisely based on your app requirements, user expectations, APIs that you want to use, etc. At the end of the day all you want is that the users enjoy and use your application as much as possible.

The statistics from flurry below show the usage of different categories of apps on Android and iOS. 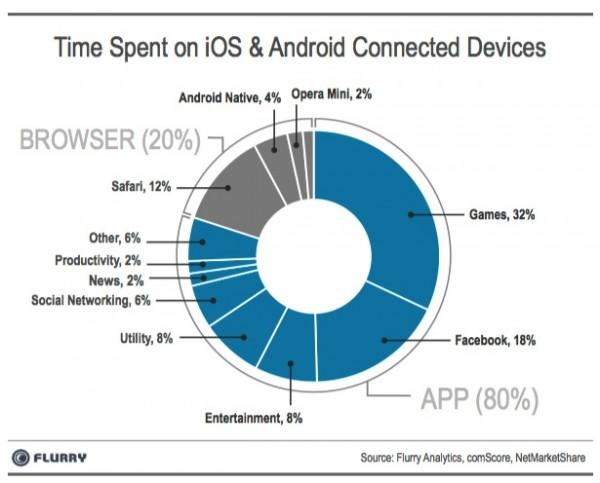 This is interesting to know as it gives an insight into what end users like doing most on each platform. If your app’s category coincides with higher percentage use apps, you have a bigger audience but might have stiffer competition from other apps. You might consider this in taking a call for hybrid or native application development.

I have seen many B2B apps using hybrid approaches to meet business requirements over focusing on end user experience, many of whom can afford to do this as their audience is already well-trained in using their existing apps.

In B2C scenarios, the focus changes a bit. End users expect the simplest and the best of experiences from your application, so you need to focus on UX, performance, simplicity, stickiness and other consumer retention concerns. There’s nothing better than when you can use a native platform specific feature here like ‘Windows Hello’ to authenticate the user by scanning their retina or leverage TouchID in an iOS App.

This article is part of the web development series from Microsoft evangelists and engineers on practical JavaScript learning, open source projects, and interoperability best practices including Microsoft Edge browser and the new EdgeHTML rendering engine.

We encourage you to test across browsers and devices including Microsoft Edge – the default browser for Windows 10 – with free tools on dev.microsoftedge.com:

More in-depth learning from our engineers and evangelists: