Leonardo is confident of scoring new business for its BriteCloud air-launched active decoy technology, after recent tests involving unmanned air vehicles (UAVs), and with a capability trial pending for the US Air National Guard (ANG).

Deployed from a flare dispenser, BriteCloud presents a false target to draw an incoming radar-guided missile away from its release aircraft. The electronic warfare technology used is contained entirely within the decoy itself, removing the need for expensive platform integration work.

Leonardo in mid-February announced that its smallest, 218-format version of the decoy – which has dimensions of 2x1x8in – had been deployed from an “Airbus target drone” during a trial conducted for Germany’s defence ministry.

Rob Laidlar, the company’s head of strategic electronic warfare campaigns, describes the activity as “a proper, rigorous workout of BriteCloud. It worked exactly as advertised,” he adds.

“We are actively in discussion with Germany over a number of potential BriteCloud integration pathways, across a number of different aircraft,” Laidlar says. “Read-across from the UK [Panavia] Tornado to a similarly integrated BriteCloud capability on German Tornado is one of the avenues that we are pursuing,” he confirms. 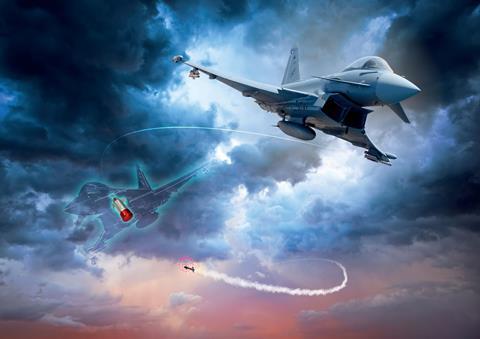 The RAF is expected to also field the decoy with its Eurofighter fleet, and “has made a Typhoon-compliant BriteCloud purchase”. 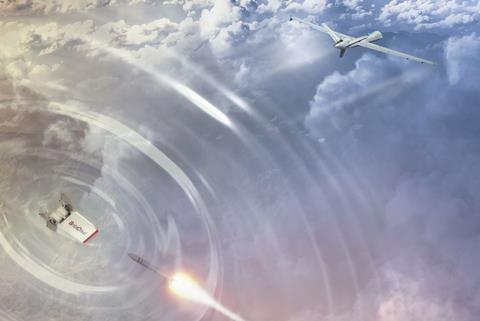 “Discussions are underway concerning further tests with live rounds to demonstrate that BriteCloud can effectively protect the MQ-9 against the most advanced radio frequency [RF] threats,” Leonardo says.

The 218 version is also to undergo trials aboard the Lockheed Martin F-16 for the ANG. To be performed as a Foreign Comparative Test activity, the work is already under contract, and the delivery of test assets has commenced. The process is to conclude before the end of 2022, with the European company working with its Leonardo US Inc unit.

Leonardo has previously performed safe separation trials of the BriteCloud 218 from the F-16, working with the Royal Danish Air Force.

Once completed, the ANG-funded project “should generate a clearance for [US] Department of Defense entities to be able to acquire the round” via a formal programme of record, Laidlar says. Leonardo notes that this could also open the way for BriteCloud sales to “the US Air Force Air Combat Command and other US services”.

Additionally, Laidlar says: “We are now seeing a growth of interest in other variants – the 55-T [for transport aircraft]; UAVs; and helicopter platforms.”

Launched in 2018, the 55-T decoy is adapted to protect tactical transports, tankers and intelligence, surveillance and reconnaissance platforms.

“We are now seeing threat envelopes of such magnitude that they are going to at some point have to find themselves in harm’s way,” Laidlar notes of such assets. “Operations in the future are likely to be in contested airspace. Uplift in RF protection is key.”

Leonardo is in “capability-sensitive discussions with a number of partner nations” about the 55-T, he says, with some of these “in a reasonably advanced state” regarding platform integration.

Interest in helicopter applications has also increased, Laidlar says. “Historically, rotary aircraft have relied upon pure physics to defend them against radar-guided threats, [flying] nap of the earth. That’s not always going to be possible,” he notes.